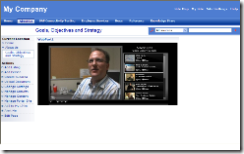 Well its possible.  I’ve knocked up an example. I took the video library example from silverlight sdk 1.0 and converted it into a sharepoint webpart.

This was relatively simple, I say simple provided you know how to code sharepoint webparts.

And that was it.

This whole thing could be customised by using web part properties and tying those into the  SilverlightControlHost creation.

Some initial problems I had was the canvas would not stretch to fit the web part I had to fix its size, this is probably down to me not silverlight though.

Now this has some great usages that I can think of, specifically in the region of data visualisation.  When there are some silverlight controls published and I’m thinking specifically of graphing, (saves me writing them!!!) then we can have some great dashboard type displays.

Add to this the AJAX stlye things I was playing with in sharepoint with a great UI we have some endless possibilties here.

I have got a book on WPF coming so when I’ve got to grips with XAML I hope to create some silverlight that will integrate from sharepoint, using httphandlers to proxy the SAP webservices.  That will be slick.

Update: I modified the code to pull its sources from a Sharepoint list. The trick here was to edit main.js and remove the section that adds the resources and call a JS function AddVideos() instead.  This function and the VideoLibrary declaration is generated in the RegisterScriptBlock of PreRender.  From there its a simple case of pulling the urls and text from a Sharepoint list, which is a different post entirely.

Here is an updated version, where I broke the xaml trying to make it less oppressive, pointing at the list which hosts two videos.